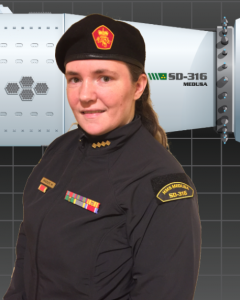 We’d like to take a moment to congratulate our own LTJG Melissa Hadley on her recent appointment as the Flag Lieutenant to Admiral Lady Chrissy Killian!

To: All Officers and Enlisted in the Royal Manticoran Navy, Marine Corps, Army and the Grayson Space Navy, and Allied Forces
From: Admiral of the Green, Chrissy Killian, Commanding Officer 10th Fleet
Re: Flag Lieutenant

By my hand, and by the authority of and acting as proxy for the Sovereign, Queen of Manticore Elizabeth III, it is my pleasure to announce that Melissa Hadley has been selected for the position of 10th Fleet Flag Lieutenant.

In Honor of the Queen.